I've been patronising quite a number of pretentious western joints lately. They make me sick in the stomach...the pint sized portions, tight prim smiles of waiters, sparkling/still water (sorry no tap) and excessive price tags.

Yet every once in awhile, a pleasant surprise comes aknocking, St Pierre's being the latest. Their seaweed butter (accompanied with warm bread as a starter) is ridiculously good. So good I just can't stop thinking about it. Best of all? It's free flow. =)

Wow. Can't believe its been such a long time since I posted. Feels like a lifetime has passed.

Going forward I'll have to write more succintly since time is short.

Foodwise- overrated. Restaurant Ember still wins in terms of taste though I like the dingy quirkiness of Open Door Policy. (chairs are semi rusty and a light actually fell on an unfortunate diner seated behind us halfway into the meal) 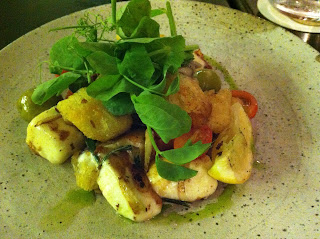 First starter- Halloumi cheese with olives, sweet pea leaves and croutons. Best eaten piping hot since the cheese starts to taste like those primary school rubbers once they turn cold. I enjoyed this dish but it didn't make me go "Hallelujah" 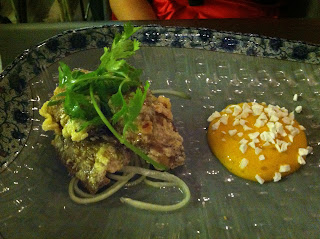 Second starter- Chicken wing (boneless) with some exotic egg yolk like concoction which actually turned out to be twisties curry flavoured sauce. The portion was really measly for the price and the fried chicken was mediocre.

Third starter- Watermelon with scallop and some shredded ham. Judging from the way my kakis were "playing with the food" and the time we took to finish this dish, I can safely say it was our least favourite starter. Sorry no pictures! 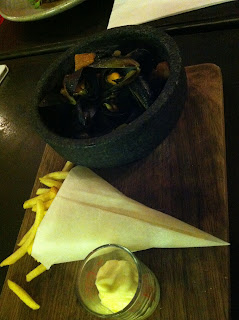 First Main course- Mussels in basil sauce with fries. I finished this within 5 mins and still felt hungry (and cheated). The portion was really pathetic. For a moment, I wish I was teleported to Brussel Sprouts, which serve solid mussels and free flow fries. 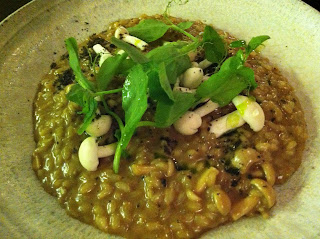 Second main course- Since I was still hungry and saw lots of people ordering the mushroom risotto, I decided to give it a go. It was really salty but this time the portion was very generous. The risotto was a little too hard for my liking. 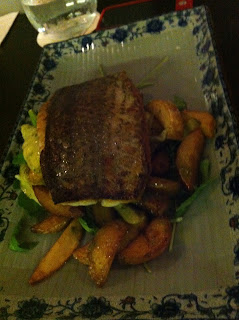 Third main course- Pan seared sea bass. Nice and hearty. I enjoyed the crisp crust. It was well executed but not particularly memorable either. A safe choice. 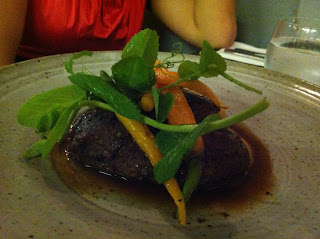 Fourth main course- 48 hour braised beef cheek with potato mochi. The meat was fall off the bone tender and this has definitely got to be one of the signature dishes of the restaurant (the other being steak tatare which we were too chicken to try) 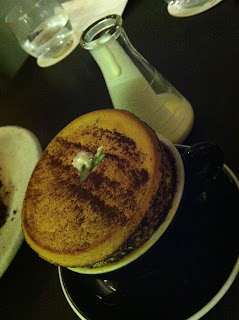 First dessert- Pistachio scented chocolate souffle. Very impressive presentation and a very generous helping. The insides were light and airy which is telling of a well risen souffle. Tastewise I'll defer to comment since I'm not a fan of pistachio. 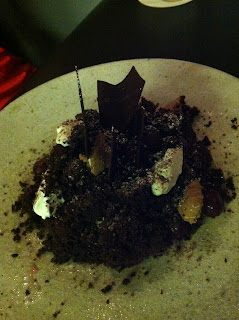 Second dessert- Deconstructed black forest cake. Looks like a mess but tastes pretty good. They were strangely generous with the boozy cherries (counted at least 15 of them!) Is it just my imagination or is black forest cake making some sort of resurgence in Singapore? 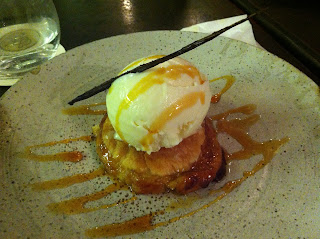 Third dessert- Pineapple tartin with yoghurt ice cream. Since there was no apple tartin in the menu, I opted for this, only to be highly disappointed at the one dimensional flavor.

Coffee. Purportedly brewed by the folks from Forty Hands. I don't take coffee but my kakis do. One ordered a flat white while the other ordered a macchiato. Both weren't impressed and had some trouble sleeping that night. 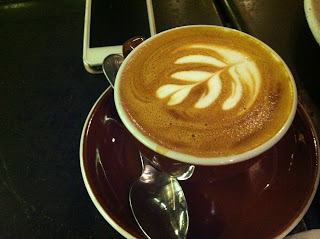 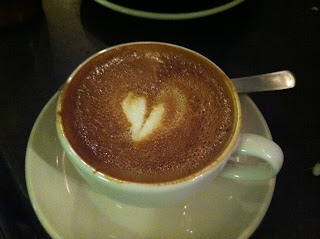 It's hard to secure a reservation at ODP because of all the hype surrounding it. At the end of the day, the food is decent and the crowd is hip. But that's about it. Don't expect to be blown away unless you are the dreamy bohemian type
Posted by Waragaw at 5:51 PM No comments: