It was one of those blah days where a good lunch is a "need" and not a "want". Egged on by some glowing reviews of the restaurant, my kaki and I decided to give ourselves a treat.

We had already memorized what to order:

Ambience: Pretty nice...we did not manage to secure indoor seats and were seated outdoors under a huge canopy. There was a hint of a breeze and a lovely view of the promenade. Service however left more to be desired. It was difficult catching the attention of the servers and the China waitresses sported deadpan expressions on their faces. 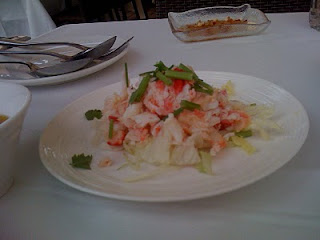 We could barely locate the morsels of flesh from the mountain of shredded vegetables, much less taste its purported sweetness. Whilst the restaurant was innovative with use of certain ingredients like dragonfruit, this was overall an underwhelming dish which did not warrant such a hefty price tag. 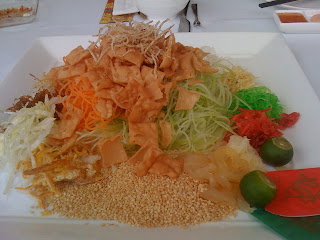 2) Seafood Deluxe Combination- We ordered a portion for one to share. The platter allows for a choice of 5 different kinds of seafood but we decided to stick with 3 (Hokkaido scallops, bamboo clams and salmon sashimi). All the items were served on a pretty leaf laid in a bowl of shaved ice. I found the salmon sashimi a tad too fishy and the bamboo clams dry and rubbery. Thankfully, the scallops saved the day, boasting a natural sweetness that can only be derived from very fresh seafood. 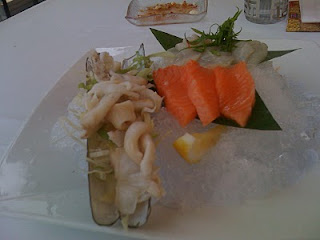 3) Australian Lobster with Vermicelli in Superior Broth- The lobster came deshelled, which is a pretty big plus point since I am one clumsy monkey. Presentation was lovely and the fiery orange broth was accentuated by lashings of green Chinese parsley. Stir in some chili padi for extra punch!. Unfortunately, the cook had left the vermicelli to soak in the broth for too long, resulting in puffy gelatinous strings that had absorbed at least a quarter of the precious broth. Pity. 4) Nian Gao- I love all things deep fried and battered, especially when done well. It makes the consumption of additional calories worthwhile. In this case, the nian gao was cooked two ways- i) battered and ii) dusted with shredded coconut "kueh kosui style". The former was a clear winner with its light crisp exterior which burst forth with gooey nian gao when bitten into. We could also taste chunks of sweet potato and yam within the filling.Whilst the nian gao dusted with shredded coconut was palatable and a creative take on traditional kosui, it paled in comparison to the real McCoy. we suspect it would have tasted better if it had been chilled for at least an hour before serving.

Verdict: Alas, at the end of the meal, my kaki and I couldn't help but feel unsatiated. Perhaps the head chef was not in during lunchtime that day. Perhaps we should have ordered beer and crabs. Or perhaps we are just incredibly fussy people. In any case, we doubt we'll be going back to Palm Beach anytime soon.