For Eastlanders out there with a weakness for fried chicken and cajun fries...Popeyes has opened an outlet in Century Square (#05-14)
Now that's one less reason to trudge all the way to Changi Airport for your Popeyes fix. 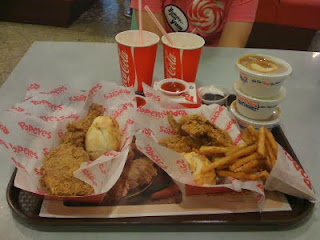 The holy grail
Some trivia about Popeyes (taken from their website)

1. Began in 1972 in New Orleans
2. Named after the character Popeye Doyle in the movie "The French Connection" (Oh..and I always thought it was named after the cartoon...)
3. Has beaten KFC before in a nationwide taste test
4. On facebook and twitter (!)
Posted by Waragaw at 5:34 AM