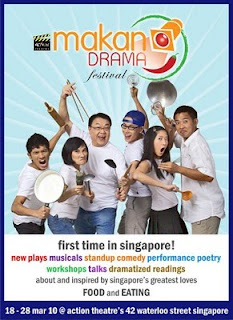 How often does one come across a local play which mixes the love of art with the love of food? This is one opportunity not to be missed!
SYNOPSIS (taken from SISTIC website)
Indulge in a scrumptious double bill of two brand new Singapore plays by two of the country’s most celebrated playwrights! Cravings and Perfecting Pratas are the theatrical main course of Makan Drama Festival, an inaugural theatre event inspired by Singaporeans’ greatest loves – food and eating! They will be performed in The Room Upstairs, an intimate theatre in a beautifully restored pre-war bungalow amidst tropical garden in the heart of Singapore’s civic district. Your ticket to this double bill will also entitle you to free admission to all outdoor performances during the Festival. These include standup comedy about Singaporeans’ culinary obsessions, performance poetry of food-themed poems, dramatized readings of fresh-off-the-oven plays, fun talks by thespians and drama gurus, musical excerpts from Hokkien Mee – The Musical plus a brand new devised play Eat Here or Ta Pao?

For the complete programme, double click the below pic: 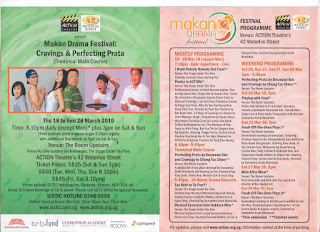 CRAVINGS: Written by Chong Tze Chien, prize-winning playwright of PIE and Furthest North, Deepest South, Cravings is a hilarious play that also takes a delicious dig into couplehood and marriage. This refreshing comedy drama is about a young husband who craves for a candlelit dinner and a passionate evening with his own wife - after having "lost" her for 9 full months during her pregnancy with their first child. Their hilarious “obstacles” include the nosy in-laws with their very own cravings!
PERFECTING PRATAS: by Desmond Sim Perfecting Prata by Desmond Sim, award-winning writer of Drunken Prawns and Autumn Tomyam, tells a comic yet moving story of a teenage Chinese-Indian boy who sets out to learn how to make perfect roti pratas from his Chinese father in order to impress his girlfriend. Smartly integrating food, humour and hearty moments, the play addresses what it takes to blend and balance opposing flavours in food and life. Directed by Life! Theatre Award winner Samantha Scott-Blackhall, this tasty double bill stars a cast of veterans as well as newcomers including Jo Tan, Edward Choy, Tony Quek, Fanny Kee, Mervyn Goh and Issac Ong.
Posted by Waragaw at 11:35 AM